Khanyi Mbau before and after picture gets South Africa talking

by Casper Dube
in Zimbabwe News
0

She recently posted a pale and recent image of herself on Instagram in a bikini prompting to before and after comparisons.

Khanyi Mbau Before and After Bleaching Picture 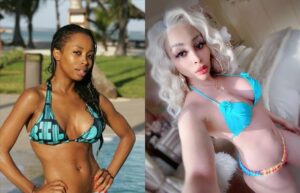 South Africans Reacts to Before and After Picture

Guys I really think we should let people do what they want with their lives as long as it doesn’t affect ours in any way . We’re so used to judging people about the decisions they make with their OWN lives & literally forget that none of it is really our business.

Yabona wena , you deserve a bells . I agree . We live once , as long as we’re not harming others , people should be left alone with choices they make for themselves . Why does this never click.
Khanyi was damn beautiful but now she looks like those dolls we used to get on lucky packets.
Her original skin color was very beautiful I don’t know what went wrong
This Khanyi Mbau before and after picture has  reminded me of Malcom X who told you to hate the color of your skin speech.
Beauty lies in the eyes of the beholder
I thought “Black don’t crack”, clearly we been lied to.
Maybe this is her strategy to win us back the land!?
Even Michael himself was so pretty before he went white but ke it’s their choice…let them be
This competition between Khanyi and Mshoza must stop, it will confuse their ancestors
They told him too late that her dad was white. I blame the elders they did the wrong rituals…
You guys don’t learn. We haven’t finished ngoBianca & you throw this? If ””’when I make money call me ‘Umlungu””” was a person.