Johannesburg based Tlhogi’s Chicken and Bunny restaurant has been ransacked by armed robbers a CCTV video emerged. 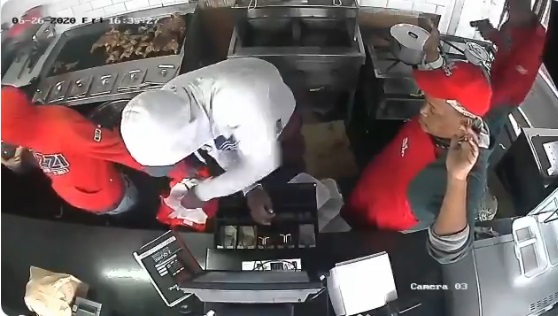 Johannesburg based Tlhogi’s Chicken and Bunny restaurant has been ransacked by armed robbers a CCTV video emerged.

In video shows three thugs dressed in dressed in UZZI and Adidas hoddies holding the Kitchen staff at gunpoint and forcing their way to the till for a few notes and coins.

Visibly shaken chefs and till operator had their hands raised above their heads a sign of surrendering throughout the robbery. Armed robbers demanded their cellphones before leaving the place.

Sit-in and take away restaurants has been allowed to operate under current lockdown level 3, a move adapted to gradually open the economy.

Video of the day: If you laugh you won’t see heaven