The letter alleges that police have sanctioned an anti-sanctions demonstration on 31 July.

The letter was addressed to the Zimbabwe Ant-Sanctions Allied Movement. The letter allegedly gave the group the greenlight to hold a demonstration in Harare’s central business district and the United States embassy in Westgate.

A number of Zimbabweans thought the letter was genuine and was a means to counter the 31 July demo being planned by members of the opposition and has been endorsed by civil society organisations and worker’s unions.

We publish the letter below: 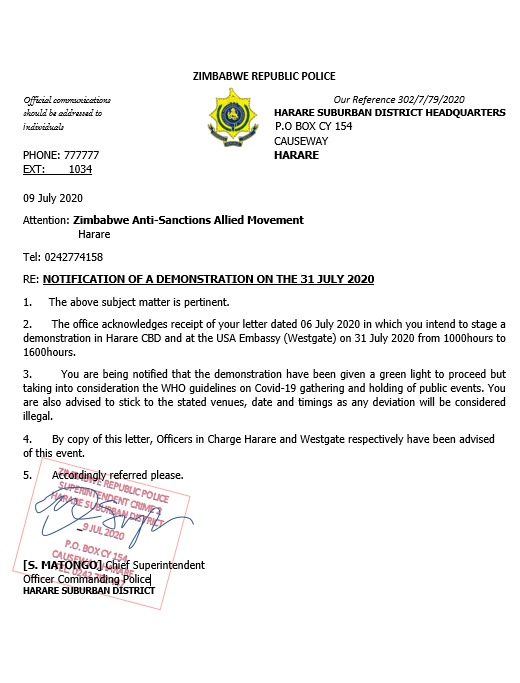 In a statement the police also warned people against circulating fake material on social media. Police national spokesperson Paul Nyathi said that investigations on the source of the fake letter have since been instituted.

09 JULY 2020
CIRCULATION OF A FAKE LETTER ON PURPORTED
DEMONSTRATION IN HARARE
The Zimbabwe Republic Police dismisses a letter which has been posted on the social media platform indicating that Chief Superintendent Matongo, the Officer Commanding Harare Suburban District has sanctioned a purported demonstration by Zimbabwe Anti-Sanction Allied Movement set for 31 July 2020 in Harare CBD and Westgate. This is a forged letter with a fake signature which does not belong to the senior officer.

In this regard, the ZRP dismisses the fake letter with the contempt which it deserves. In fact, no notification has been made to the relevant regulatory authority by Zimbabwe Anti -Sanctions Allied Movement.

The Zimbabwe Republic Police takes this opportunity to warn individuals and groups circukating fake or doctored messages on the social media platform that they will be arrested. Investigations have since been instituted on the source of this fake letter.