Naak and his BMW M8

Naak posted his BMW M8 above with a caption, “BMW ///M8 competition. Bring your Mercedes Benz”

Prince Kaybee replied below Naak’s Tweet, “I studied the comments in this post, I then understood if it was me that posted the same picture with my Mercedes I was gonna seem arrogant, there were gonna be the nastiest comments to a point people say I rent my cars so I realized I’m playing on unfair ground. Enjoy your BMW abuti”

Naak was not happy with Prince Kaybee’s response and fired back, “I drove BMWs long before you got your first Mercedes… That’s not me bragging. Just me simply pointing out that banters about the 2 brands is something I’ve engaged in long before you eventually surfaced. Tshini.”

Some fans supported Naak and stated Prince Kaybee, whom they called Princess, has a victim mentality and always think other celebrities are referring to him.

Some fans questioned if it was necessary for Naak to savage Kaybee, but he responded, “He made my post about him.. Andi thethi no Thetha Naye ku Twitter mna
Another follower suggested the fight was about to begin but Naak responded, “Nothing is beginning.. I’m not starting anything nor do I have the time to..if my post was directed at him trust me I’d have NO PROBLEM letting him know. Ndiyazi postela mna.”

Some Prince Kaybee fan tried to fight in the DJ’s corner, “Ingathi nawe ungxamele uphendula ungakhange ufunde kakuhle. He never said you bragging but reading the comments people are smooth talking based on your post about a car. If it was him standing next to a car people would say his bragging about a borrowed car. Sungxama Anga

But Makubalo fired back again, “Why under my post and not kweyakhe itimeline.. Come on bra.”

Business coach Vusi Thembekwayo congratulated Naak and challenged him to come for the rally, “Mfondini that’s a MEGA buy. Congrats boy. Come play with us at our next run-rally. Would love to see that beast on the tarmac. … oh, bring your Huawei for some pixels.” 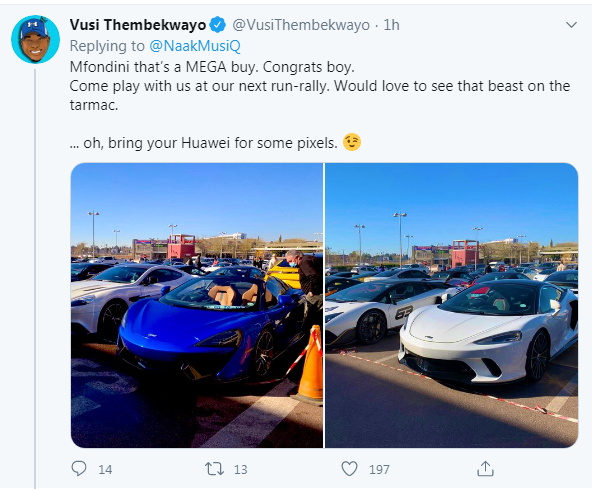 Actor Mangaliso Ngema responds to sexual misconduct allegations against him

Actor Mangaliso Ngema responds to sexual misconduct allegations against him