Mzansi has a lot of rising stars and it’s inevitable to fall in love with their talent. Zamani Mbatha has ladies drooling and although Isithembiso was his first gig, everyone can agree he plays it like a pro. His sister may already be killing it in the industry but the gentleman has made its crystal clear that his success is as a result of his talent although she is his inspiration. Let Zamani Mbatha’s Biography quench your thirsty questions as we look more into his life (age, career, net worth, milestones, family and more). 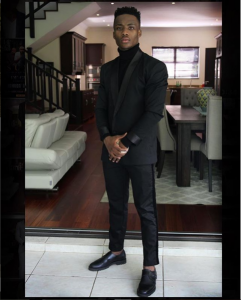 Did Zamani Mbatha’s role in Isithembiso kick start his career?

Zamani’s first screen appearance was on the TV drama “Isithembiso” on Mzansi Magic. Yes, you got that right. It was is first gig and he slays it to the tees. Acting is Zamani’s super power and therefore he did not need to attend any classes to be good at it. “I was in high school last year, this is my first job, my first everything. Before this, I wanted to be a soccer player but that did not work out, but I have always known that acting was my calling” he says. Talk about destiny!! 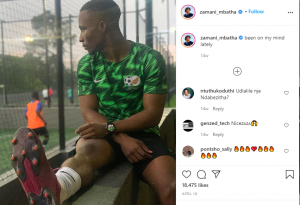 Did his sister help him score the Isithembiso gig?

He is the brother of a renowned actress, obviously she pulled some strings for him. Unfortunately the boy is just making it because of his talent. His acting dexterity is exclusively from what he watches other actors do on screens. Should we call it photographic memory? No, the right words are “pure talent.” It’s barely three years from the time we first saw him and already he keeps fans glued to their TV screens.

Since Isithembiso is no more, what’s next for Zamani Mbatha?

After three seasons, the show leaves its actors out in the cold when Mzansi Magic cancels the drama series. The younger actors of the show including Nandi Mbatha’s hope is to grow with the show but fate yanks the milk bottle from them without warning. Although Zamani substantiates his wreckage, he later grows to comprehend the arduous entertainment industry with all its obstacles. He has however managed to score a Netflix drama series deal that features the likes of Anga Makubalo and Candice Modiselle. There is light at the end of the tunnel after all.

He is in three season of one show and already has been nominated the same year he gets into the limelight. In 2017 Zamani Mbatha is nominated in the “Rising Star” category at the Mzansi Magic Viewer’s Choice Awards.

Well we have established that Zamani is not dating Simi, ”Nandi Mbatha” outside Isithembiso so who is Zamani Mbatha’s girlfriend?

He is charming we know but single ladies could you loosen your grip on this subject matter and allow Zamani to focus on his career? It might not be what he says and it might be pure speculation but the actor hasn’t reveals anything about his love life. The only girl he takes pictures with is Nomzamo, his sister and they always serve us sibling goals.

What is Zamani Mbatha’s Net worth

“Meticulousness pays off”, quotes Zamani at one point. Even if his soccer dream are shuttered, the Isithembiso actor is killing it through hard work and prayer. Although his net worth is still under review, Zamani is making boss moves to keep the money rolling in. Judging from his start, his future is set to be a successful one. Watch the space, the youngster will soon be on the Forbes list if he keeps cruising at this pace.

What Car(s) does Zamani Mbatha drive?

The worth of a man is derived from the wheels he owns right? Like every other celebrity, Zamani give us a sneak peak of his new Audi A3 TFSI SPORTBACK . Let’s have a look at the whip the actor splashed on recently. Pretty impressive!!