It is no lie that beauty is glove in hand with brains. It is also a fact that girls do run the world. In fine, pretty girls rule the galaxy, like Nomzamo Mbatha. Not trying to be feminist, just stating facts. She holds a ton of titles to her name and some might call her jack of all trades. But let’s face it, she is doing all that because she can. Nomzamo Mbatha’s Biography reveals all about the actress’ life (Age, Career, Boyfriend, Net worth and all the juicy stuff). Let’s grab our cheese and wine please.

Education and Qualifications: Bachelor of Commerce, Degree in Accounting at University of Cape Town

The renowned actress stepped into the limelight when she emerges as one of the three finalists in the 2012 MTV Base VJ Search. However her role in Isibaya as “Thandekha” aids her rise to eminence. 2015 is a good year for her as she stars in a movie “Tell me something sweet and a television show “Umlilo” .That same year, she embarks on hosting a reality travel show called “Holiday Swap”. Let’s summarise her acting career shall we:

In 2015, she is selected to represent Neutrogena as the first South African in that role.

She receives an Africa Movie Academy Award for Best Actress nomination for playing “Moratiwa” in Tell Me Something Sweet in 2015.

In 2018, she spends time touring Kenyan refugee camps, in her role as UNHCR Ambassador.

Mbatha is recognized as one of the OkayAfrika 100 Women 2018 Honourees, by OkayAfrica Digital Media in 2018 again.

In January 2019, she is appointed a UNHCR Goodwill Ambassador and is inducted into the Golden Key International Honour Society as one of its Honorary members

In 2019, she lands a role in the upcoming film “Coming to America”

2013 – Hot Chick of the Year at the Feather Awards

Is Nomzamo related to Zamani and Nandi Mbatha?

They have the same surname and must be related. How lucky are the Mbatha siblings to have all managed to make it in the entertainment industry. Well, only two of the three are related. Nandi Mbatha is by no means related to Nomzamo and Zamani who are siblings. The two’s older sister passed on in 2009 and another sister of theirs, Carla committed suicide in 2014.

So who is Nomzamo Mbatha’s Boyfriend?

Once one becomes a celebrity, people hunt down all things pertaining to your life. It comes with the territory. “I have been engaged. Yes, I have had a rock on my finger, and I don’t plan on having a rock on my finger ever again.” Wow talk about secrecy and who could this ex-fiance be? Although Nomzamo didn’t mention a name, we think it’s obvious that she’s talking about Khaya Mthethwa.

Nomzamo Mbatha at one time dated Maps Maponyane who is a media personality up until 2018. Purportedly, Maps had a wandering eye. He got into an entanglement with several women including Nadia Jaftha, a Cape Town blogger.

After the two split up, the media goes abuzz and start speculating that Nomzamo and the cricketer Kagiso Rabada are booed up. It turns out that the two were just at the same place at the same time. The Mzansi sweetheart is busy conquering the world and happily single. There you have it, Nomzamo Mbatha has no boyfriend. This disclosure however isn’t a call for thirst traps to land in her DM.

She might have received backlash for not knowing what a heart break is but the renowned actress really knows what it means to have your heart ripped out of your chest. After she deactivates her account, she then comes back to clear the air. Of course she admitted she has experienced heart-ache, not from Maponyane but from a past traumatic experience. She narrates how her sister’s suicide left a hollow in her heart on a post accompanied by a photo of herself holding a lit candle.

‘I have experienced many tragedies in my life. But the one that sucker-punched me was finding my baby sister in our family garden after she had taken her own life. It is a heartbreak that I will never fully recover from but will always be in the process of healing from. I felt guilt and shame.’

‘Was I not good enough for her to live for, was I a good sister, what signs did I miss. Why did I get on that flight the night before because if I was home the next morning she wouldn’t have gotten the chance to execute her plan. I then turned my fear and heartbreak into love,’ opened up Nomzamo.

The actress serves us with good news on twitter: “Trust the process. Setting my table” #CAASignsNomzamo. Nomzamo will feature in Paramount’s upcoming “Coming 2 America” alongside Eddie Murphy, Arsenio Hall, Jermaine Fowler, Wesley Snipes, Leslie Jones and Tracy Morgan in the upshot to the 1988 hit comedy classic. To those who were wondering why she left Isibaya, this is the reason. Sis is going international. 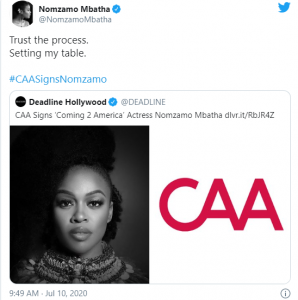 What is Nomzamo Mbatha’s Net worth?

Drum roll please before we address the matter in question. At only 30 years of age and Nomzamo is already a Goodwill Ambassador of the United Nations Refugee Agency (UNHCR), an ambassador and spokes-model for brands such as Neutrogena, Puma, Audi, Veuve Clicquot and McDonalds. At one point she was on the Forbes Africa 30 Under 30 list.  With all that on her crown she is bagging a lot of money in the range $1 million – $5 million. 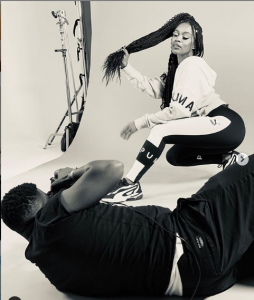 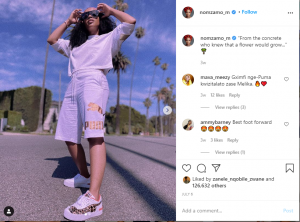 “I can’t tell you when last I had a birthday where there was a cake and candles on it, people singing and me closing my eyes to make a wish and blow out my candles. But what I have come to accept about my life is that the order of its happenings has always been unconventional. In every way. I was feeling nervous about this new turn. I felt ill prepared for it because I still have so many things I’m trying to grow out of……..A Happy New Year to me. May it continue to be challenging, rewarding, intentional, abundant and COURAGEOUS,” she posted. 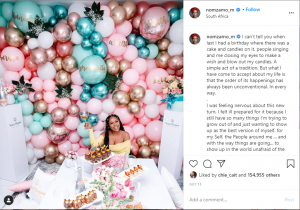 What are Nomzamo’s accomplishments as a UNHCR Goodwill Ambassador?

From the time of her rendezvous as an Advocate for the LuQuLuQu campaign in 2017, she manages to field missions to refugee camps in Malawi, Kenya, and South Sudan.  Her first project with UNHCR sees Nomzamo visiting Dzaleka, the prime refugee Camp in Malawi. Several months later, she visits Kakuma Refugee camp and Kalobeyei Integrated Settlement in North Eastern Kenya.

The two trips’ focal point was advocating for the fortification of susceptible people in refugee camps. Nomzamo meets members of the LGBTQ community and visits protection houses established to shelter endangered and vulnerable women and children.

Her third trip with UNHCR takes her to South Sudan, where she becomes the first African high profile supporter to visit IDP settlements in Juba and the remotely located Maban refugee camp. In Maban, Nomzamo focuses on understanding the state of the healthcare and education systems in the area. South Sudan left a lasting and special impression on Nomzamo. She has since dedicated herself to the creation of powerful content to raise awareness and funds for the South Sudan situation.

Who can ever forget Thandekha Zungu’s heart rending exit from Isibaya? Subsequent to Nomzamo Mbatha’s egress from the soap opera, she pays tribute to her co-star Sdumo Mtshali. Stemming from her exit, Mbatha posts a heartfelt message on her Instagram page to her TV husband of eight years, Sdumo Mtshali.

“Kusukela ekqaleni (From day 1), to the very last frame. Our love and respect has transcended beyond the screen. I say this without restraint, you are possibly the most incredible human being there is. Unchanging, giving. So much center. So rooted. I will never have the words for how you have shaped me not only as a person but also as a performer. Grateful to have told the most beautiful love story South African television has ever seen. Grateful to have gained one of my very best friends.

I have to share this too… because I want people to know the kind of heart you carry. How you nearly missed a flight out of Durban just so you could help me do readings for the last Coming 2 America tape submission. Letting me know I got it. ‘Trust your Voice Nomzee… let’s find God in the scene…’ You have always wanted to see me and others soar. Here’s to Sbu and Thandeka! Here’s to you! @sdumo.mtshali @isibayamzansi,” says Mbatha.

Stay with us, Thandeka! #Isibaya

Nomzamo is forever and a day imposing the spotlight with her incredible philanthropic work and she continues to serve Africa with zeal. She is the quintessence of ‘generosity’. Her exquisiteness will be also playing her part to alleviate the predicament that bemoans the African continent. Speaking to SABC news anchor( Chriselda Lewis), Nomzamo says her foundation “The Lighthouse” will donate, R1.5 million towards the Covid-19 relief. Blessed is the hand that giveth.

It is purported that Nomzamo cut ties with her friend  Isibaya co-star Jessica Nkosi because they were fighting over Khaya Mthethwa. Clearly they don’t believe in sharing. Nonetheless, Nomzamo during an interview with Khanyi, asked people to let sleeping dogs lie as it was none but a trivial grudge.

One never catches a break when they enter the limelight. Nomzamo Mbatha’s responsibility as an activist comes under weighty scrutiny when she was poses  for a pic with court indicted abuser, Authur Mafokate. This meticulous event has masses questioning  if the Isibaya actress has the right to call herself an activist.