Malume has been a tweleb recently and masses are wondering if he has switched careers. L’Vovo’s career has been one bumpy roller coaster ride but he has managed to always pick himself up when he falls. With his sketchy health issues, will Derrango be able to continue being an entertainer? L’Vovo Derrango Biography lays bare all there is to know about his age, net worth, awards, girlfriend, cars and all the nitty-gritty. 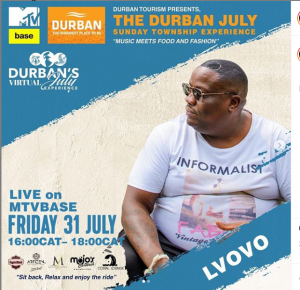 Education and Qualifications: National Diploma in Language Practice at Durban University of Technology

How did L’Vovo rise to fame?

Derrango has a craze for engaging people which sees him being an MC at different events. This allows him to meet several artists one of whom is Zakhele Madida who gives him a prospect to record a song. Grasping this opportunity with both hands, Derrango manages to record his debut album.

Three time nominee at the SAMA awards, L’Vovo is surely a household name. His song earns him substantial airplay and so he performs it at the Metro Fm Awards ceremony in Mbombela Stadium 2011. Believe it or not, Derrango has shared the stage with music sensations like Ringo Madlingozi and Thandiswa Mazwai. He has also performed with Big Nuz in Nigeria during the MTV Base Awards in 2011.

It is evident from his publicity that L’Vovo Derrango has bagged awards in his career lifetime and these include.

What happened to Derrango’s Music?

As years go by and times change, so do trends and music. L’Vovo unfortunately failed to embrace change and therefore his music became obsolete. Even if his audience has grown smaller, L’Vovo’s name is still on people’s lips and he has managed to safeguard his fame.

Of late, Derrango has been making headlines on twitter on a regular for various reasons. Recently on one of his twitter rants, he admits that he is no longer fit to do music as his career is persistently rusting. So does this mean he is establishing a twitter career? Although what he means is still fuzzy, a lot of people would love another tweleb of his calibre as his tweets always turn twitter into an amusement park.

Things we didn’t know about L’Vovo

A near death experience in 2019 has the singer change his eating habits and aim at being fit. The loud music reverberates and everyone on the dance floor is dropping it like it’s hot to L’Vovo’s Iyavaya. He can feel the pain in his chest but he ignores it. Maybe if i brush it off it will stop, he thinks to himself. He has to make the bag right. Suddenly he can’t breathe and he can see his soul leaving his frail body. Is this the end? “I was very scared and was in so much trouble I had to stop performing. I decided then and there I wasn’t going to give up.” His associates suggest taking him to hospital but L’vovo refuses as hospitals scare the crap out of him.

For those who have been wondering why Derrango has hinted on a career switch, I guess it is now evident. A second health scare hits poor Derrango around as he goes into overdrive. Live performances and record sales keep the bag rolling in but if one is not fit like L’Vovo, over working becomes a death trap. The artist was recently admitted to a medical facility for fatigue as he was always on the road, performing every other weekend. ”Since the Durban July, I have been busy performing all over the country every weekend. It is not gout but fatigue and being drained,” Derrango speaks out.

There is nothing as embarrassing than a grown man facing public rejection after sending flirt signals. L’Vovo could have saved himself the embarrassment by sliding into the DM, isn’t it what inboxes are for? Thick Leeyonce had to hang the poor man out to dry and let the whole world see. She side-splittingly responds to Derrango’s tweets telling him to stop making moves on her. The model debases Lvovo by uncle-zoning him. Was it a stunt to expose their huge age difference or she simply was hinting she is taken? Single ladies please come save Uncle Derrango!! 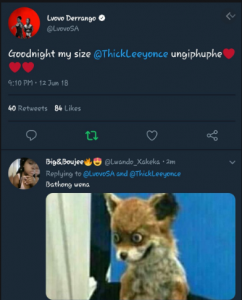 Ever heard of the term squad goals? Well squad friendship isn’t goals. It’s the fakest type of friendship ever and L’Vovo agrees with me. Covid -19 had Mzansi on a beer thirst movement for two months and when the ban gets lifted every drunkard is in a frenzy. L’Vovo takes this chance to warn his fans. “Don’t drink with friends that will send you to go and buy whatever they need, because they are loaded with cash, those people are not genuine friends,” he warns.

Lvovo presages his fans that their friends may send them to go to buy things for them in front of their girlfriends. He told them to be careful of such friends. He also commented on a video of people singing in the queues at Makro posted by DJ Tira on Twitter. “Imagine you can order the same alcohol online. All these people have smartphones. Ayi kusakude phambili” (There’s still a long way to go)” he wrote. Social distancing please!!!

What is L’Vovo Derrango Net worth

In 2014, the Award-winning kwaito star, L’vovo leases a house in Durban’s Manor Gardens and sells a Mercedes Benz ML worth R1,3million, a C200 Sports and a Hyundai H1. This causes a stir and people comment, “The guy is in deep financial trouble. We don’t know what’s happening because he spends most of his time with his friends who are not in the music industry. I think he might have overspent the money he received when he signed up with Afrotainment,” said the source. 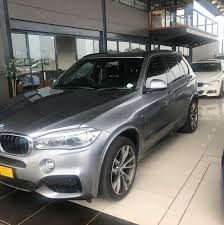 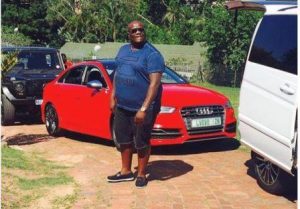 L’vovo’s manager, Thobela Dlamini, confirmed that they have sold the cars but denied that L’vovo is in financial trouble. “I can tell you now L’vovo is financially stable. He owns a house in Durban. He drives an expensive VW R32 which you can’t even afford. People just love spreading rumours,” Thobela said. Recently, he has been driving around in a Mercedes Benz SUV till he got himself this gorgeous BMW ride. Although L’Vovo Derrango’s net worth is a mystery , he has enough money to flash around which comes from live performances, endorsement deals and album sales.

Despite saying he is against gun violence, L’Vovo is walking around with a gun. . “I’m performing and not planning on killing anybody. I am calling for an finish to the killing, together with taxi violence, hostel shootings and all types of violent crime.” The kwaito artist has been displaying himself because of the character which he plays on Mzansi Magic’s local drama “eHostela” which tells the narrative of murderers in hostels. “I’m not selling violence however telling a narrative,” he mentions.The drama is about on the KwaMashu Hostel, north of Durban. What a relief!!

The world would be a better place if all people were like L’Vovo Derrango. He has a big heart and is always positive no matter what life throws in his face. 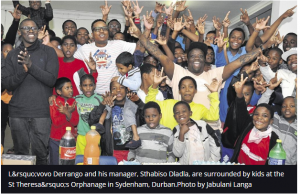